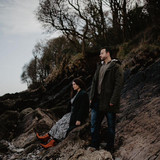 Derw started as a project between songwriter Dafydd Dabson and his mum Anna Georgina, a lyricist, after they got to the final of S4C songwriting competition Can i Gymru in 2018. The band is fronted by Welsh/Iranian singer Elin Fouladi and features musicians from Welsh acts Zervas and Pepper, Afrocluster and Codewalkers. Combining Fouladi’s soulful voice with chamber pop influences like The National as well as pop acts like London Grammar, the band has a strong connection with the past and their family history, being named after Anna's father - Derwas. Derw’s first single, ‘Dau Gam’, came out in May 2020 on CEG Records. It was made ‘Track of the Week’ on BBC Radio Cymru as well as getting airplay on BBC Radio Wales. The band’s second single, ‘Ble Cei Di Ddod i Lawr’ came out in Augustof the same year and spent nine weeks on the BBC Radio Cymru playlist. This was followed by their first EP ‘Yr Unig Rai Sy’n Cofio’ in February 2021. The band were busy during lockdown, filming a series of live performances at Acapela Studios, Pentyrch as well as performing live for the first time at Tafwyl and Sesiwn Fawr Dolgellau. The band’s next single, ‘Ci’ is out on September 24th 2021 on CEG Records.