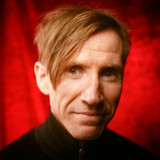 Kevin Kerrigan (aka "KK") is an Instrumental Music Artist and composer who creates music for film, TV and the imagination. He has previously worked with the likes of Bjork, Brian Eno, and James Newton Howard amongst others.   KK has released music under a variety of names, such as KK & The Steampunk Orchestra ( https://spoti.fi/2PyQnZL ) and the children's music series The Rainbow Collections ( https://spoti.fi/32xv2VM ) with Sophie Barker of Zero 7.   KK's music has featured extensively on TV (HBO, BBC, etc) as well as in movies, and his audio only albums are evocative, atmospheric and soundtrack-like in nature - soundtracks for stories and the imagination.   "The Comet Tides" - his latest album is a soundtrack album for reflective listening and contemplation.   http://www.kevinkerrigan.net