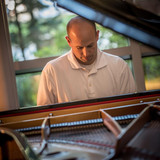 Jason has recorded his albums at Big Idea Studio in Sandy, Utah with the help of Chuck E. Meyers and Jake Bowen who are well known for producing video game music for PlayStation as well as Disney Pixar. Jason has self published 9 albums and 8 piano solo books. He has also provided music for the popular TV documentary, History of the Saints as well as many other online video productions. Jason has typically been known for his solo piano work and piano solo hymn arrangements, LDS Piano Solos and Christmas piano solos, but in 2017 he collaborated with 3 of the former lead singers (Alex Sharpe, Lynn Hilary and Edele Murphy) from the groups Celtic Woman and Riverdance to produce a hymn album that features their vocals with his arrangements. In 2018 he collaborated with violinist John Knudson to release an original album entitled "Finding Peace". His music is known for its melodic relaxing nature and has been streamed over 100 Million times worldwide.