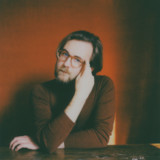 Jasper Schalks (1994) is a Dutch americana singer-songwriter. He started writing his own songs in 2014, already inspired by his storytellers like Bob Dylan and Randy Newman. Schalks' songs are characterized by nostalgic melodies and effective lyrics, where the power lies in their simplicity. Some of his songs present characters on the fringe of society, people who are way more interesting than the happy few or the ordinary Joes and Janes. Other songs are simply honest songs about his (former) bad luck in love. His first EP These Things Shall Pass was released in 2018, his debut album Stand This Storm will be released soon.