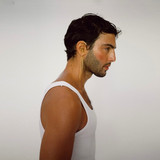 Darin began his career when he was 14 years old, writing songs for others. He debuted as an artist with his first single ”Money for Nothing” in 2005 at the age of 17 with Sony Music. The song went straight to #1 on the singles chart followed by the platinum selling album ”The Anthem". Darin has released eight albums, all of which have achieved either Platinum or Gold status, and seven of them entered #1 on the album chart. He started his own record label Dex Music In 2015, where he released the Swedish #1 albums, ”Fjärilar I magen” and ”Tvillingen”. The first single, ”Ta mig tillbaka,” became the most successful song of his career, streaming 6x platinum in Sweden. He was the most played artist on radio during 2018 and went on his first arena tour in Sweden in 2019.