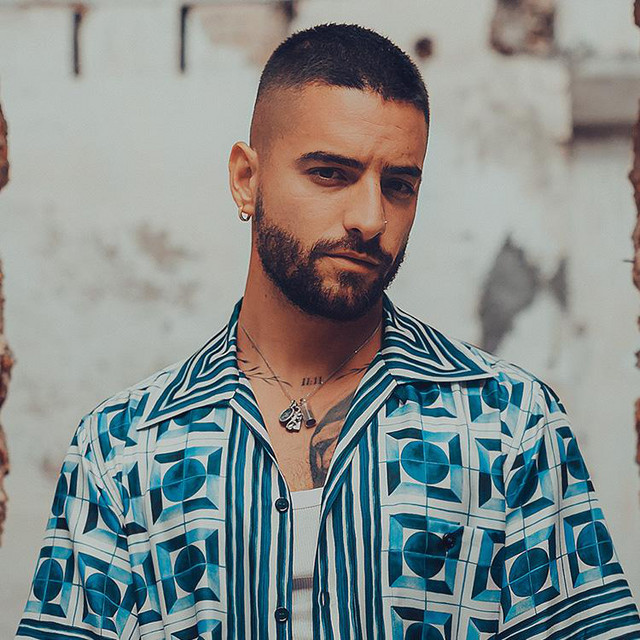 Maluma is the stage name of award-winning Colombian pop singer, songwriter, and rapper Juan Luis Londoño Arias. Possessed of a sweet, grainy tenor voice and streetwise yet romantic delivery, the pop urbano was able to cross over from a reggaeton audience to the mainstream thanks to infectious early singles such as "Obsesión" and "Miss Independent" (whose videos also went viral). He is one of less than 30 performing artists with over 25 million YouTube followers. His 2012 debut Magia endeared him to radio listeners across Latin America, while 2015's Pretty Boy, Dirty Boy broke through in the U.S., landing on the upper rungs of Latin Pop, Urban, and Tropical Charts. Since that time, Maluma has been charging toward world domination with a steady stream of videos, charting singles, albums, and guest spots -- including a 2019 duet with Madonna on "Medellin," whose steamy video racked up 29 million views in its first few months. He was also the subject of the documentary Maluma: Lo Que Era, Lo Que Soy, Lo Que Seré. Maluma's name is a tribute to his family. Before he began singing professionally, his now-famous stage name was a tattoo on his left leg. He made the word up from the initial syllable of his family's names -- his mother Marlli, his father Luis, and his sister Manuela. He adopted the name a few years later when he started singing and gained fame as a teenager. He originally pursued football as a vocation for eight years and was gifted enough to attract the notice of the media in his native Medellin. He initially sang for pleasure at hundreds of birthday parties, weddings, and celebrations. Given the rise of social media, and YouTube in particular, his already intense focus on music turned exclusive. In 2011, at the age of 16, Maluma cut his first independent single, "Farandulera." Due to its internet popularity and emergent radio airplay in Colombia, the song gained the attention of Sony Music, which signed him. The following year, Maluma released Magia, his debut album. Several of its singles -- "Obsesión," "Loco," and "Miss Independent" -- received consistent airplay and hit the charts in Colombia and Latin America. His next single, "La Temperatura," entered the North American charts and earned him a Latin Grammy nomination in 2013.

In 2014, he was the featured vocalist on Elvis Crespo's hit "Ole Brazil," recorded for the World Cup. Maluma returned in early 2015. His first release, PB DB. The Mixtape, was a compilation of hits with two new singles, "Me Gustas Tanto" and "Climax." The new tracks charted and set the stage for a brand-new album, Pretty Boy, Dirty Boy, which appeared in the fall. The recording was produced by Walter Kolm. In 2016, Maluma released a collaborative track with fellow Colombian star Shakira, "Chantage," and the video became massively popular, racking up over one billion views online within five months. The track "Cuatro Babys," which reflected him as a swaggering Lothario with a rotating cast of women in and out of his bedroom, sparked a backlash when offended listeners called out the song's objectification of women. Some circulated a petition to have it removed from digital platforms. (It wasn't, but Maluma apologized.) In 2017, Maluma was named "Artist of the Year" at the Premios Lo Nuestro, a Latin music awards show presented by Spanish-language television network Univision. That same year, he began work on his next album, writing songs in English as well as Spanish. In November 2017, he delivered an initial pre-release single, "Corazon," featuring Brazilian singer Nego do Borel, that peaked at number five at Hot Latin Songs. In May, he released the full-length F.A.M.E., produced mainly by the artist's Medellin camp, including Édgar "Edge" Barrera and "Rude Boyz" Kevin ADG & Chan el Genio, with further duet contributions by Timbaland ("Mi Declaracion"), Prince Royce ("Hangover"), and Jason Derulo on the bilingual "La Ex." The album reached the top spot on the Latin Albums chart and number 37 on the Hot 200. Early 2019 saw Maluma release a remix of the single "Mala Mia," which featured contributions from Anitta and Becky G. A few months later, he collaborated with Madonna on the song "Medellín" from her album Madame X. The pair's hi-tech performance of the song at the Billboard Music Awards brought the house down with its use of holograms. In May Maluma released his fourth studio album, 11:11, supported by the singles "HP" and "11 P.M." His collaborators on the date included Ozuna, Madonna, Daddy Yankee, and Ricky Martin. It entered the Top Latin Albums chart at number one in June while F.A.M.E. was still in the Top 20. A few days later, YouTube Originals announced the release of its documentary on the singer entitled Lo Que Era, Lo Que Soy, Lo Que Sere, directed by Dominican filmmaker Jessy Terrero. Released in early 2020, his single "ADMV" became another hit. ~ Thom Jurek, Rovi