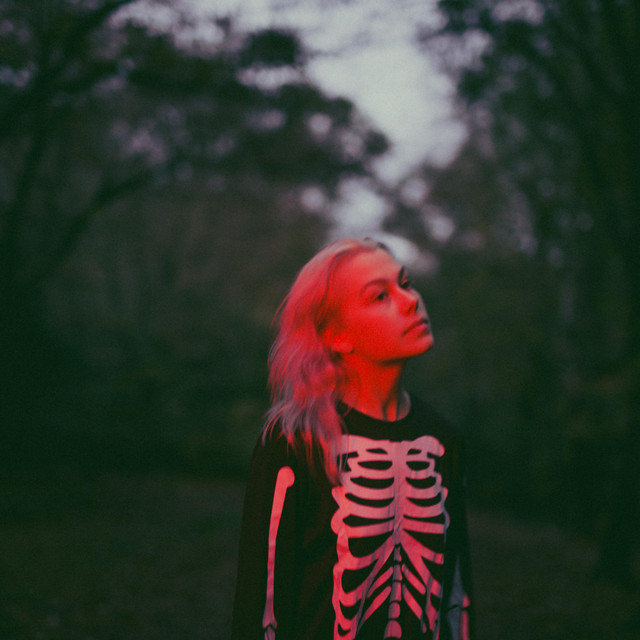 A Los Angeles-based singer/songwriter with a dreamy and hook-filled indie pop heart, Phoebe Bridgers' witty lyrical perspectives, sadly beautiful songs, and commanding melodies quickly jettisoned her to worldwide acclaim. Bridgers emerged out of nowhere in 2015, and in the space of just a few years was collaborating with veterans like Conor Oberst and peers like Lucy Dacus and Julien Baker as millions of fans connected with her work. In addition to her high-profile collaborations, Bridgers' solo albums drew significant praise and attention, with a solid debut giving way to darker tones on 2020's Punisher. Bridgers was born in 1994 in Pasadena, California. She began playing guitar and writing songs at age 11, and by the time she was a teenager, she frequently played around L.A. while attending Los Angeles County High School for the Arts by day. Bridgers released her debut 7", "Killer," in 2015 via Ryan Adams' Pax AM label. A trio of buzzworthy singles -- "Smoke Signals," "Funeral," and "Motion Sickness" -- appeared in early 2017 in anticipation of the release of her Dead Oceans-issued debut LP, Stranger in the Alps, which arrived later that September. In 2018, Bridgers garnered even more widespread acclaim with the release of the Boygenius EP, a collaborative effort with fellow indie songwriters Julien Baker and Lucy Dacus. At this point, Bridgers was a critical darling, with her albums receiving rave reviews across the board. Song placements in movies and television, multiple appearances on NPR's popular Tiny Desk series and one-off collaborations with Fiona Apple and The National's Matt Berninger all happened in this phase of her career and in January of 2019, Bridgers and Bright Eyes' Conor Oberst surprise-released a self-titled album from their new co-led band Better Oblivion Community Center. Oberst and Bridgers had already sung together on a track from Stranger in the Alps, but the new project further explored their collaborative chemistry. The band made several television appearances and toured the U.S. and Europe shortly after the album's release. In 2020, Bridgers announced her second solo album, Punisher, was complete and would arrive later in the year. In advance of the album's release she began sharing new songs, starting with the drifty folk of "Garden Song" and following it weeks later with "Kyoto." Punisher was released in June of 2020, again on Dead Oceans. ~ James Christopher Monger, Rovi