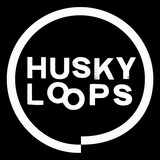 Husky Loops are not your average rock band. In fact, they want to redefine what a rock’n’roll band can be. Sure, there’s three members – Danio Forni (vocals/guitar/production), Pietro Garrone (drums) and Tommaso Medica (bass) – but instruments certainly doesn’t mean that they’re stuck in the familiar territory that classic rock music has found itself in. Husky Loops formed in London but originally from Bologna, Italy. They have signed to 30th Century Records, super-producer Danger Mouse’s record label, and have released their debut album “I CAN’T EVEN SPEAK ENGLISH” on August the 16th, anticipated by the group’s latest singles "Everyone Is Having Fun Fun Fun But Me” and "Let Go For Nothing”, two earworms that are bringing the band’s outside-the-box musical thinking and talent to whole new heights.   2019 has been a big year for the band, but the past two years weren’t less exciting: They have released 3 EPs, 1 mixtape, collaborated with Sergei Polunin and Rankin to create a stunning film that the band soundtracked with their track “Tempo”, their song “Everytime I Run” was part of the FIFA19 soundtrack and they have toured extensively around the UK, Europe and USA, also supporting big names such as Placebo, The Kills, Spoon and David Byrne.