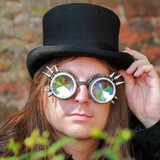 A Czech-born, British-based steampunk artist, music producer and photographer, Charles began writing his own lyrics aged just 12. Performing and recording under the moniker, Lord Charles, he takes his influences from Queen, Rammstein and Jean-Michel Jarre and learned to play the piano privately before delving into the world of electronica after receiving a new synthesiser. In 2009, he released his debut album ‘Imagination’, re-releasing it under his own label in 2016. Just two years later, he introduced his EP ‘The Composer’ to the world. Containing a composition he created during his teenage years, it was originally refused by EMI, after Charles contacted them with a demo. In 2020, he released new single, ‘Prachy’ – the first single on his Czech album. After moving to London, Charles enrolled on an electronic music course at the SAE Institute, while also signing up for a photography course at Westminster college, and a journalism course at Oxford’s British College of Journalism. Charles then took a new creative direction. A firm fan of all things ‘old England’, he honed his steampunk image and began working on new music for his three upcoming albums. He then launched his Lord Charles Entertainment company, focusing on producing music, film and photography art. The future is certainly bright for Lord Charles – watch this space.