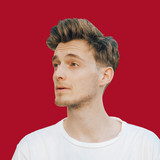 Nickless’s Journey in music and his sudden success is almost a little extraordinary for todays standards. Without any previous social media hype, released cover songs or any association with a casting show, Nickless as a complete newcomer won “Best Hit” at the Swiss Music Awards for his first ever single “Waiting”. So what makes Nickless so unique? One thing is clear, it didn’t happen over night. The young man behind the music knew from a very young age what he wanted to do. When he was as young as 7 years old Nickless learned to play the drums. Then at 8 years old he not only started learning the piano and the guitar together with a music coach, but he also started collecting his first live experiences playing in a band. When he was 12 years old he was the drummer playing for a teenie combo named Klirrfaktor and got a taste for success winning local talent competitions. Due to his journey it’s easy to draw comparisons to artists such as Dave Grohl, Phil Collins or Don Henley who all like Nickless transitioned from being a very talented drummer of a band to becoming the lead singer of their own project. Despite us living in a time of Social Media and Casting Shows, he proves it possible to base a career start purely on talent, hard work and endurance. Nickless is also the only artist who made the unique journey from being a “Tea Boy” in a recording studio to playing some of the biggest stages Switzerland has to offer.