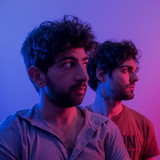 Event Horizon is a French alternative rock duo with metal and progressive inspirations. These two guys met in college and discovered that they were both introverts while opening up to the world through music. After hitting a few roadblocks, the band used all the experience they had accumulated to write and release their first EP To Genesis in 2020. This self-produced opus is about the struggle to achieve one's goals. Human beings are constantly thinking about unnecessary concerns. Listening to music is one of the few moments when a person can let go of their emotions without confusing their mind. Making music is about creating those moments when a person is focused on their feelings. The band wants to use their songs to offer an escape through a journey. To surprise and make people think about what they already have in their daily lives, the band draws from their own past. They are passionate about music but have spent too much time not writing down the ideas that come to them. So they intend to push people to take action to get better and feel better. Event Horizon's sound may seem unexpected. It goes from big heavy riffs to soft and melodic tracks, changing the moods and considering the instruments as important as the vocals. Nostalgic for 90's rock, they like to use modernized analog synths. Currently awaiting the release of a 2nd EP, a few tracks are released occasionally, each one being totally independent from the others.