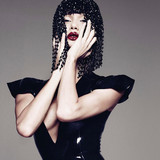 In 2011 singer/songwriter/performer Nomi Ruiz began working under the alias, Jessica 6 and released the Electro-Pop album ’See The Light’ which combined Electronic Dance with R&B,Soul and Pop. Anhoni of Antony & The Johnsons was featured on ‘Prisoner Of Love’ and the lead single ’White Horse’ received over 2 million hits on YouTube. The next EP titled ‘The Capricorn’ Nomi took the J6 sound deeper into Dance & House, enlisting producers Eli Escobar, Rampa and &ME of Keinemusik to name a few. ‘The Capricorn’ was called “seductive, dark, smart, and as catchy as Miss Jackson's greatest hits” by i-D Magazine and Noisey declared “her first release since 2011 is a banger!” The latest LP titled 'The ELIOT Sessions' explores R&B, house, and pop and freestyle while delving deep into discussions of modern LGBT culture, as well, touching on desire, transamory, and toxic masculinity within the community.