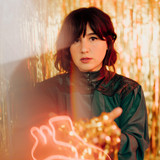 Serrat’s fifth album, ‘Hardcore From The Heart’ is the followup to 2017’s acclaimed ‘Dripping Springs’. For the recording, Serrat travelled to Redwood Studio in Denton, Texas, where she teamed up with engineer and producer Ted Young (Kurt Vile, Sonic Youth). ‘Hardcore From The Heart’ starts with loss and ends with acceptance of the impossibility of achieving an ideal life, examining the imbalance that exists between the life lived and the ideal sought. It’s title is borrowed from the book by sexologist and essayist Annie Sprinkles to reflect the nuanced, emotional and introspective journey that Serrat pursues in her lyrics and music. On the album, Joana is joined by guitarist Joey McClellan (Midlake, BNQT, John Grant), bassist Aaron McClellan (Josh T. Pearson, Israel Nash), drummer McKenzie Smith (St. Vincent, Sharon Van Etten, First Aid Kit) and keyboardplayer Jesse Chandler (Mercury Rev). The work is rounded off by contributions of both pedal steel guitarist Eric Swanson (Nathaniel Rateliff, Israel Nash) and her brother Toni Serrat on drums. The magical varnish of mastering this flammable and fragile material is down to sound engineer Heba Kadry (Slowdive, Beach House). The end result is a painfully honest and moving album, which grows on you with each hearing as new and rich complexities are discovered. ‘Hardcore From The Heart’ showcases Serrat's best vocal performance to date and marks a literary peak in her songwriting career.