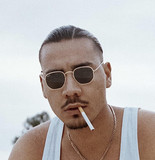 There are plenty of up and coming rappers in German hip hop. But none of them is like Apache, a gangsta, who occasionally puts on his dancing shoes. That long haired tall guy in a white tee. Kinda rapper, kinda rockstar, rocking dungarees and John Lennon sunglasses, bringing back the nineties without being oldschool (outdated). »Kein Problem«, »Nicht wie du«, »Brot nach Hause« - week after week German hip hops Miroslav Klose is cracking millions of streams with a new catchy tune and stands out with extraordinary music videos that leave no doubt: Apache is the rookie of the year. Why? Because Apache is different. His sound: somewhere between retro-vibes and current Zeitgeist. Rap, R'n'B, Pop? Doesn't matter. His voice: striking and melodious. His style: ironic but never ridiculous. Catchy but not calculated. Just different. Ask the boys in pimped out cars, ask the art school alumni, ask the kids in the comments section, ask the whole German hip hop scene: there's no way past Apache. He earned his status. Hands down.