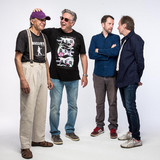 Rockier than Jazz, jazzier than Rock: The Berlin fusion quartet B3 combines nifty arrangements with strong melodies and convinces live with lots of passion and groove. B3 mastermind is keyboarder, composer and music producer Andreas Hommelsheim. He played with Alphonse Mouzon, John Lee and Gerry Brown to name just a few, shared the stage with Kool & the Gang and worked with stars like Nena, Nina Hagen, Jan Delay, Smudo, Max Raabe, Ofrah Haza, Ute Lemper and Jennifer Rush. As musical director of the German version of countless famous film productions, he collaborated with Andrew Lloyd Webber and Hans Zimmer, among others. For “The Lion King” he received a gold record as producer of the German original soundtrack. Guitarist and singer of the band is Ron Spielman whose play between blues, rock, jazz and funk is distinctive and with virtuosity and has long enjoyed cult status among press and fans. Spielman has already played with Tommy Emmanuel, Beth Hart, Bootsy Collins, the Chick Corea Electric Band, the Climax Blues Band as well as Johnny Guitar Watson and was tour guitarist for Andreas Kümmert, Flo Mega, Ivy Quainoo and many more. Together with Frenchman Gérard Batyra on bass and drummer Lutz Halfter, Hommelsheim and Spielman released the live album "Get Up! Live at the A-Trane" in 2017. Additionally, their discography comprises the two studio albums "Memories In Melodies" (2015) and "Back To My Roots" (2014).

The band is currently working on their fourth full length.