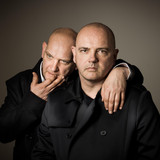 Alongside Wet Wet Wet, Texas, and Deacon Blue, blue-eyed soul pop siblings Hue & Cry were one of the most successful acts to emerge from the Scottish music scene that dominated the charts in the late '80s. The duo from Coatbridge, North Lanarkshire decided to start making music together in 1983, when Pat Kane was about to graduate from university and brother Greg was still at school. After releasing their first single, "Here Comes Everybody," through the small Glasgow label Stampede in 1984, they signed to Virgin Records subsidiary Circa, where they released debut album Seduced and Abandoned, and scored their biggest hit, "Labour of Love," three years later. Top Ten albums Remote (1988), Bitter Suite (1989), and Stars Crash Down (1991) followed, but by the time of 1992's Truth & Love, released through their own short-lived Fidelity label, their star had started to wane, and after 1993's Best Of, the pair never charted again. Free from their commercial constraints, they released a series of experimental albums throughout the '90s, including a collaboration with composer Richard Niles (1994's Showtime!), the jazz-based Piano & Voice (1995), JazzNotJazz (1996), and 1999's Next Move, which incorporated drum'n'bass, R&B, and Latin funk. In 2005, they briefly returned to the mainstream when they lost out to Shakin' Stevens in the final of ITV Popstars comeback contest Hit Me Baby One More Time. The resulting exposure earned them support slots with Jamie Cullum and Al Green, and in 2008 they released their first studio album in nine years, Open Soul, followed a year later by Xmasday. Three years later, the brothers returned with their 11th studio album Hot Wire. The pair headed out on tour across the U.K. to support the release and also issued the singles collection A's & B's the same year. 2014 saw the release of Remote: Major to Minor, a collection that included their seminal album Remote, as well as a book charting the formative years of the duo, re-imagining of the albums tracks and demos, B-sides, and live tracks from the time. Celebrating their love for Frank Sinatra and the influence he had on their career, the brothers recorded and released September Songs in 2015. A collection of Sinatra staples handpicked by the duo and recorded in their own style, the album was released to coincide with what would have been Sinatra's centenary year. Returning to their own material in 2017, the duo released their 14th studio album, Pocketful of Stones.

Inspired by relationships, parenthood, and the political landscape across the U.K., the album saw the brothers updating their classic contemporary pop songs with flourishes of alternative electronics. ~ Jon O'Brien, Rovi