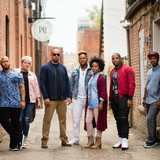 Life is a race. What are you running for? Run51 is challenged to point the hearts and minds of young men and women to what truly satisfies. While popular culture often promotes the corrupt and destructive pleasures of money, power and sex, Run51 promotes freedom, peace and love given to us through the gift of the cross. The band is led by a few former athletes. Run51 strongly identifies with the athletic culture and a desire to perform well. However, its success is not based on only winning a physical prize, but on the knowledge that the members have freedom to run for something much greater. Jason “JB” Burris went to the Ultimate Training Camp in the early 2000s. He saw a need for more relatable music to bridge the gap between Christian songs and the contemporary urban context and sound that many of today’s athletes connect with. As a drummer, he gathered some of his friends and formed the UTC Band to bring this vision for worship to another level. From there, the mission expanded and skyrocketed into a full-blown movement. Run51 is now a collective of artist, singer/songwriters, worship directors, youth pastors and Cru staff from around the country who are passionate about reaching people where they are at. Female vocalist include Crystal Whitaker and Genie Uribe, male vocalist (and emcee) Chaz Miles and J. Scott, bassist Lance “Shellz” Shelton and keyboardist/producer Jeremy “JGreenChords” Green have joined JB on his mission and haven’t looked back. Galatians 5:1