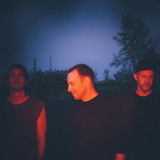 Plants and Animals have been playing together for 20 years, so they basically started as kids. They were a big part of the mid-’00s Montreal music renaissance, when they first became known for their ferocious live show, and they still are. They have been nominated for prestigious awards, opened for big acts and headlined shows around the world. They are Nicolas Basque, Warren C. Spicer and Matthew Woodley. Their fifth album is called The Jungle. It’s their shortest and most certainly their boldest. Eight acts in a world full of noise. It comes out in October 2020.