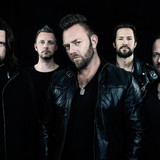 With 4 powerful studio albums sold worldwide the band has truly established themselves amongst the elite of progressive metal. Circus Maximus has made their mark on both national and international charts, including the prestigious US-Billboard charts. Unlike other bands in the genre, Circus Maximus’ main focus are the melodies, not only the musical abilities. The latter is definitely present but it is first of all the catchy hooks and the memorable riffs that has made them one of Norway’s most popular musical exports. The band has toured with the biggest acts in the genre, and have done memorable shows worldwide. 2 which ended up being released as official live shows. “Circus Maximus – Live in Japan” (performed in front of 15.000 fans at the prestigious Loud Park festival – YouTube Release) and their latest release “Havoc in Oslo” (a sold out show at one of Norways most famous concert venues - DVD/Blu-Ray) which showcases a musical expression unlike any other band in rock, jaw-dropping musicianship and a live show that surpasses most acts in the genre. Circus Maximus has proved themselves as one of the best from the north, not to mention the world.