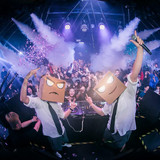 Djs From Mars bring the mash-up attitude into Electronic Dance Music. Their videos on YouTube have over 150 million views. They released official remixes for David Guetta, Laidback Luke, Sean Paul, Pitbull, Coolio, Fragma, Dirty Vegas, and the list goes on... Their tracks and bootlegs are supported by the biggest djs in the world like David Guetta, Tiësto, Diplo, Steve Aoki, Afrojack, Oliver Heldens, Nicky Romero, Carl Cox, Laidback Luke, and more.... In 2013 they get their own spot in the DJ MAG TOP 100 DJS. In the last 10 years they’re touring non-stop in the 5 continents: USA, China, India, Australia, Japan, Canada, Brazil, Mexico, Indonesia, plus all European countries, with an average 100 shows per year in the last 10 years, they’re one of the most booked acts in the whole dj scene. In 2018 they produce a megamashup for David Guetta with his greatest hits (now it has already 40 million views). They start a collaboration withthe top French dj that leads to some remixes for Guetta’s set at Ultra Miami 2019, plus an official remix for his single “Stay” in 2019 and the global hit featuring Sia “Let’s Love” in 2020. In 2020 they release a new collab (official release) with Tiësto on his own label Musical Freedom: “The Drop”. In 2021 they release an official single on Alok’s label (Controversia/Spinnin) called “Sunday Morning”, "You Spin Round" on Sony Germany and they work on more mashups with David Guetta for his legendary “United At Home” streaming sets.