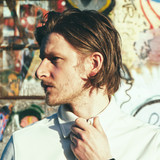 Artist/producer Desperate Youth releases his debut album Stranger on June 18, 2021. Desperate Youth’s first singles from the upcoming debut album have already received airplay on Finnish national radio and on online radio stations all over the world. The debut single Another Time, featuring ‘The Queen of Synthwave’ NINA, featured on YLE Vega (Finnish public service radio) all through the summer of 2020 and still frequently on synth-focused online radio. According to Spotify, more than every fifth unique listener has saved the song to their own library. The release also got coverage in the Finnish press, which few debut releases do. With the next single Maze of Lights , Desperate Youth showed proof of his versatility. From a catchy synth-pop debut to an emotional rock ballad accompanied with a beautiful music video shot in an almost deserted Helsinki. The genre could be defined as indie electronica with strong influences from the ‘80s, Rock and Synthwave. The album single, and title track, ‘Stranger’ is an uptempo pop song in the mold of The 1975, St. Lucia , and CHVRCHES. Perfect for a warm summer full of love and adventure. “The title track, Stranger, is about the feeling you get when you don't want a moment to end because you feel a connection with another person that you never felt before. And you're ready to do everything in your power to make this person feel the same way about you" The album forms a tragic love story that is playing out in a dream.