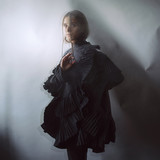 Delivering ethereal, reverb-laden songs with melancholic vocals that concern loneliness, love, and yearning, Adna is a Swedish alternative singer/songwriter from Gothenburg, Sweden. Her heart-warming songwriting and resonant compositions quickly earned her a fan base with albums such as 2015's Run, Lucifer and 2017's Closure. She began writing music during her mid-teens and after having amassed enough material, put out her eponymous debut EP via the Stockholm-based Despotz Records in 2012. Following the release, Adna began to earn sonic comparisons to the work of artists such as the xx, Bon Iver, and Florence + the Machine. She spent the following years writing and recording further songs, sporadically releasing several singles before a remix EP, Memento Mori, arrived in 2015. The effort featured reworkings of her material from fellow artists such as Eternal Death and DÖDEN. Adna then relocated to Berlin to pursue her songwriting career on a more frequent basis while also performing throughout Europe. In 2014 she put out her first album Night, also via Despotz. She returned in 2015 with a cover of Ry X's track "Berlin" before releasing the live EP Smoke. 2015 saw the arrival of her sophomore LP, Run, Lucifer. Adna spent 2016 writing the follow-up effort and the record -- titled Closure -- arrived in early 2017. ~ Rob Wacey, Rovi