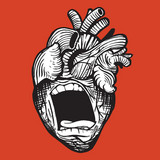 Few can digest and spit their pain back out like Ricky Mendoza. A veteran storyteller with a brazen voice, he asks the big questions and invites his audience to brave his aching heart with him. Though he grew up entrenched in classic punk bands like Bad Religion and Against Me, Ricky enjoys the simplicity of an acoustic guitar. While still maintaining the fury of his influences, the stomping, anthemic melodies come naturally to his songwriting. After five years, Ricky has released the album The New Hurt onto a battered and bruised world in need of love, understanding, and catharsis. A more lush production filled with instruments and textures he hadn’t yet explored, Ricky’s third release is the culmination of when an unstoppable new love meets the immovable force of loss. The years since No One Has Their Shit Together changed his perspective with a new, blossoming relationship, where he “threw [himself] to without a safety net.” But with the ups, came the downs as this album was also his chance to process several deaths in his personal life. Throw in an isolating pandemic that we’re now carefully emerging from, in his own words, “the timing feels so damn right.” For Fans Of: Against Me, Neutral Milk Hotel, The Rural Alberta Advantage, Frank Turner, Tim Barry, Scott Biram Website: https://rickymendoza.org/