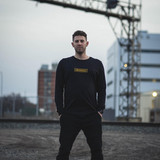 Better known to his fans as PRZM, Canadian producer and DJ, Jorel Minuk, was born on the East coast and raised on the prairies. His electrifying stage-presence combined with bass-heavy dance music delivers a full-spectrum listening experience which has been shaking club and festival-goers since 2012. PRZM’s music has been featured on various labels like brednbutter, Trap City, Phuture Collective, and Sauce Kitchen and supported by the likes of UZ, Sidney Sampson, Perkulat0r, and Herobust. His breakout track, “ECHO” which premiered on thedopestdrops was an instant hit, helping propel his name to the upper echelons of trap music. Some of his other notable works like “Reloaded” and “Take My Hand’ have reached millions of listeners through Soundcloud, Spotify, Apple Music, and YouTube. As one of Canada’s premiere electronic music producers, PRZM is someone worth following closely. His charisma, coupled with his forward-thinking production style is a formula that’s taking the future of dance music by storm.