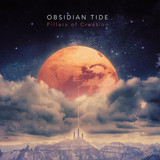 Formed in 2012 in the suburbs of Tel-Aviv, Israel, Obsidian Tide are Oz Avneya (guitars and clean vocals), Shachar Bieber (bass and harsh vocals) and Erez Nadler (drums and programming). The band’s debut EP Debris, an ambitious concept album, was released in 2015 and received critical acclaim worldwide. In August 2019, the band released their first full length album, Pillars of Creation, which is a 55 long masterfully-produced concept album. It tells the tale of a man who goes on a journey of enlightenment. On his journey, he witnesses riveting stories and learns of horrible truths. Finally, he makes a bold choice to follow his conscience, and his choice changes… everything. With dozens of shows behind them, the trio are experienced performers. They have a mesmerising live show that stands out in the local scene and has a loyal and enthusiastic fanbase.