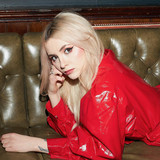 Oxford based outfit PETSEMATARY take a darker look into the ethereal, combining soaring vocals with dreamy and distorted soundscapes. Beginning as the solo-project of songwriter Gaby-Elise Monaghan, PETSEMATARY has since expanded into a four-piece, with longtime collaborators Luke Allmond, Jack Kendrew and Casper Miles finalising the line up. Influenced by artists such as Elliott Smith, Sparklehorse and Jeff Buckley, the band have gone on to play slots at Ritual Union Festival, Big Scary Monsters’ Big Day Out and Rock Against Violence, as well as support slots with artists such as GHUM and Soeur. “The newcomer makes the kind of sound you might expect from someone named after a Stephen King horror novel: their forthcoming debut single reveals itself to be a brooding slice of melodramatic goth-pop in the vein of Anna Calvi, with lilting vocals, shoegazing jangle and a ghostly atmosphere.” -Hidden Herd “Soaring vocals, drifting from raspy warbles to powerful crooning.” -Flying Vinyl