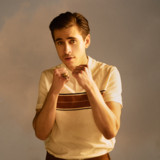 Hi, My name is Tomi. I write songs, sing them and play guitar. I grew up in a tiny town in Finland called Tuusula with my parents, my big brother and our dog, Nala. She’s a Lapland dog. Nearly everyone in my family is a pilot. Stunt, commercial, fighter, you name it, we got it. I’m too blind to be a pilot so my dad gave me a guitar when I was five. I fell in love with it. Found Stevie Ray Vaughan. Fell in love with blues. Made music on the side while pursuing a pro football career. Played against Real Madrid. Lost against Real Madrid. Chose music and started writing songs. Joined the army and became a part of the urban warfare squad. Learnt about proper work ethics. Moved to London alone to pursue a career in music. Did over 1000 shows in 4 years. Found and lost my courage a million times. Decided that I need someone else on my team. Got screwed over. Decided that I don’t need anyone else on my team. Got signed to Sony Music Germany. Realised that I did need a TEAM…got a great one. Released my first single just before the COVID pandemic hit which has been a serious headache but creativity always finds a way through. Please go check out my latest single "I Wanna Be Your James Dean" and check out my debut EP "I Think We Need To Talk" 🙏