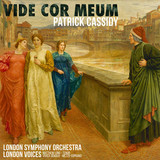 Patrick Cassidy is a knight of Italy, conferred by the President of Italy, and bestowed with the title of Cavaliere dell’Ordine della Stella d’Italia (knight of the Order of the Star of Italy. He came into prominence with the release of the Children of Lir, the first symphonic work in the Irish language. Recorded by the London Symphony Orchestra, it remained at Number One in the Irish Classical Charts for over a year. Patrick released his debut album Cruit in 1988, featuring music by 17th and 18th century Irish Harpers arranged for baroque ensemble. Other works include Deirdre of the Sorrows and Famine Remembrance, premiered at Saint Patrick's Cathedral, New York. In addition to his classical work Patrick scores films. Credits include Hannibal, Veronica Guerin, King Arthur, Layer Cake, Che Guevara, Ashes and Snow, Kingdom of Heaven, The Front Line, L'Aviatore, Kill The Irishman, Calvary, 1916 The Irish Rebellion. Patrick’s famous aria, Vide Cor Meum was composed as a “mini” Opera for the Ridley Scott film, Hannibal. This aria has been presented at both the Oscar and Emmy Awards and Vide Cor Meum has appeared in multiple top-ten lists and essential collections throughout the world including the Warner Classics CD, 40 Most Beautiful Arias. Patrick’s newest work The Mass, recorded with THE London Symphony Orchestra and London Voices, was released in November 2019. Patrick’s opera Dante will premiere in Verona in September 2021, to coincide with the poet’s 700th anniversary.