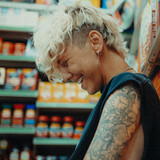 “Writing music is how I speak to people” - Dylan Holloway Combine born enchantment and a bad-boy nature with the ability to speak to the heart through song, and you’ll understand why the effortless allure of Dylan Holloway has been supported by Radio 1's BBC Introducing, lead to writing songs with KT Tunstall & working on music in Bryan Ferry/Roxy Music's personal studio. The British singer/songwriter & multi-instrumentalist delivers warm & raspy vocals over retro inspired indie-soul, taking notes from classic hook-heavyweights & modern contemporaries like Elton John, King Princess, Harry Styles & Vampire Weekend. Self-taught musician, Holloway grew up addicted to the hits being blasted out from the record-player in his family home. Freedom & rebellion are strong themes in Holloway’s life, like dropping out of collage at 17 to move to London for music or unapologetically breaking the boundaries of gender-norms as an out transguy & this attitude can also be seen seeping so brazenly into the music. Dylan has written music for Film & TV (Fast Girls, They/Them/Us and Amazon Prime's 'Treacle') along with music for other artists including singles which have peaked in top 40s around the world. “In serious situations I find it very hard to express my thoughts and emotions, but put me on stage in front of a mic and I’ll tell you everything” Photography @riocarciero