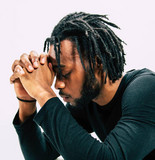 TruthCity is a songwriter and recording/performing artist. Originally, from Virginia, TruthCity moved to Brooklyn, New York 7 years ago to pursue a career in music. His lifelong devotion to his craft was inspired by prolific and distinguished artists such as Jay-Z, Coldplay, Nas, Jean-Michel Basquiat, Andy Warhol, and many more. The once-homeless emcee converts strangers to believers through his stories of struggle and perseverance in his music as well as on stage.