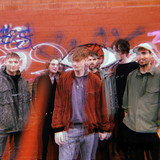 Living proof that seven is a lucky number, Mantis State combines vocals, saxophone, guitar, bass, keyboards, and drums to live up to the ‘stereo vision’ of their namesake. The group met at Leeds College of Music in 2015, where they bonded over a shared ambition to get people dancing and put a unique twist on funk. Their music effortlessly balances heavy riffs, ambient electronic sounds and warm brass, merging together jazz, funk, soul and pop rock. The band cites inspiration from various tunesmiths, from Stevie Wonder and Prince to Jamiroquai, Red Hot Chilli Peppers, TOTO and Vulfpeck. They have performed in an array of venues, breaking out of the North to sell out shows in Camden’s Jazz Café, Soho’s Spice of Life and Islington’s Queen’s Head amongst other London venues. Competing against thousands of talented musicians, they recently advanced to the semi-finals of the New Blood Contest for a chance to play at the Isle of Wight Festival in 2021, which was discontinued in light of the global pandemic. In previous years, they have been regulars at events such as the Saltaire festival and have been promoted by Live in the Hive, where their performance ability shines. The music video of their 2019 debut single, ‘How Could You?’, has garnered over 13k views on Facebook over the last year and their latest single, ‘Sweetest Feature’, was also met with positive reception. Mantis State have recently announced a new single ‘Empty Eyes’