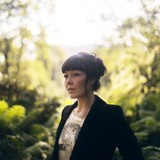 Sometimes less is so much more, and in the case of Sumie’s self-titled debut album, the combination of her voice and an acoustic guitar is the most hypnotic and disarmingly simple spell. Born Sandra Sumie Nagano from a Japanese father and Swedish mother in Gothenburg, Sweden, she first began recording her songs from her home in 2008. Sumie released a pair of EPs on Bandcamp 2010’s transit and 2012’s Let’s Get Lost, before signing to Bella Union, the label of former Cocteau Twins , Simon Raymonde. The 2013 self-titled debut album was recorded and produced in Berlin by German pianist Nils Frahm using his studio and by producer (and fellow pianist) Dustin O’Halloran. Sumie has also surfaced on others’ work. She sings on ‘Cover Hearts’, a track from composer David Wenngren’s Library Tapes project among others. For a singer-songwriter, the benefit of starting from a point of quiet is the room it allows for manoeuvre afterwards. Such is the case with the subtly cinematic second album from Sandra Sumie Nagano, Lost in Light, due for release via Bella Union on 10th November 2017.