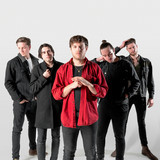 indie rock outfit released their energetic third single, ‘I Think It's the Way She Moves', which debuted at #11 on the triple j unearthed charts. The song was also chosen by Tones and I as a finalist in the 'That One Song' competition, which landed them a spot in the top ten. You can stream 'I Think It's the Way She Moves' on all major streaming platforms. They’re quietly working away on their debut EP, with fellow Mixing Engineer Phil Threlfall @ The Base Recording Studios. Keep up to date with all updates of the boys’ progress on their social media platforms below.