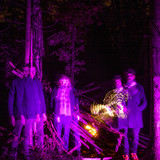 Formed near Munich as a post-hardcore band, the Notwist gradually began to embrace a fusion of classic '80s indie pop songwriting and scruffy electronic backings indebted to Oval and Autechre. The quartet comprises brothers Markus and Micha Acher (on vocals/guitar and bass, respectively) plus programmer/keyboard player Martin Gretschmann and drummer Martin Messerschmid. Their self-titled 1989 debut and 1992's Nook were rough-and-tumble punk LPs. Third album 12 marked the group's first flirtation with electronics, though the chord structures and vocals of Markus Acher marked the Notwist more as an alternative band. The band then gained an American distribution deal with Zero Hour, and after 12 was reissued, fourth album Shrink -- almost entirely abstract electronic in nature -- appeared in 1998. Neon Golden (2002) and The Devil, You + Me (2008) were both song-oriented in nature, albeit with electronics continuing to play a significant role in the band's material. In 2013, the band resurfaced with the single "Close to the Glass." The album of the same name, which boasted some of the Notwist's most accessible songwriting and experimental instrumentation, arrived in early 2014. Later that year, the band issued The Messier Objects, a collection of instrumental tracks written in the years between The Devil, You + Me and Close to the Glass. The live album Superheroes, Ghostvillains & Stuff appeared in 2016, capturing the second of the band's three consecutive sold-out shows in Leipzig, Germany in late 2015. ~ John Bush, Rovi