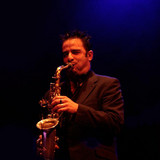 Saxophonist, Producer, Composer, Arranger and Conductor, @Sebiojazz was born in Nice - France As a teenager, he became passionate about music and has discovered improvisation. This musical freedom very quickly becomes a means of expressing itself without limits. After studying music in conservatories and music schools in his area, he was awarded 1st prize for jazz and classical saxophone, and he has also learned the flute because the musical activity is rich in experiences, and he had to get skills as much as he could. 'Cause He had to be versatile as much as possible to meet the requirements of orchestras in search of musicians.