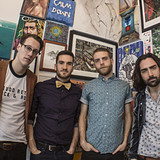 Formed in 2010, the band Of Gentlemen & Cowards has seen ups and downs, including an appearance on Late Night With David Letterman and an ill-fated cruise ship gig that broke the band’s heart and transformed their sound into a more soulful one. Through it all, the band persevered, and their brand of optimistic, well-crafted modern indie rock is borne from experience, both good and bad. Their latest single Don't Say is a conversation played over soaring guitars, saturated backing vocals, and sloshing drums. Produced by John-Angus MacDonald (The Trews) and mixed by Gus van Go (Arkells, Sam Roberts), it’s slick modern rock played through blown-out speakers that grabs you by the front of the shirt and doesn’t let go.