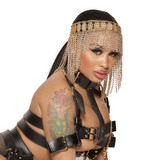 DreamDoll is the rap alias of Tabatha Robinson, a flamboyant and ribald MC who gained a following through social media and roles in the reality television programs Bad Girls Club and Love & Hip Hop: New York. On May 16, 2017 she released her debut single Everything Nice, distributed through Gwinin Entertainment, which led her to gain a substantial music audience. Following that year she released her debut EP titled Life In Plastic, the EP consisted of seven tracks including Team Dream & We All Love Dream.   DreamDoll’s second EP, Life in Plastic 2, a follow-up to her first project Life in Plastic , focused on improving herself musically and showing a upgraded version of herself. The lead single, Pull Up (WYA) was released in Late June to aid the following project releasing a few months later. The EP consisted of featured appearances from Lil' Kim (“Funeral”), Day Lee (“Adore You”), cupcakKe (“Splish Splash”) and LouGotCash on (“Make Your Move”).