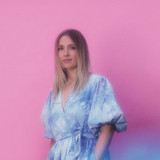 Ali Barter initially found success following the release of her debut EP, entitled Trip, in September 2012, it featured the single "Run You Down". A 2013 Triple J Unearthed winner, she earned a spot on the lineup for the annual St Jerome's Laneway Festival of that year. She followed this with support slots for Vance Joy, Cloud Control and The Rubens. 2014 followed with the sophomore EP Community, and touring with The War On Drugs. Barter's third EP, entitled AB-EP, was released in 2015 and featured the single "Hypercolour". Two singles saw the light of day in 2016 - "Far Away" in January and "Girlie Bits" in August. 2016 also involved touring with The Rubens, City Calm Down and The Jezabels and held sold-out single launches in Sydney and Brisbane. During this time, and inspired by her experiences studying music at a university in Melbourne, Barter penned an op-ed piece for Australian media website Junkee in December 2016 about the importance of including women in music history. The piece garnered a large response, including from Yoko Ono, who personally retweeted the article.