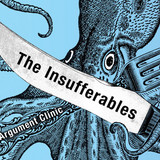 Fans describe the original music of San Francisco’s The Insufferables as a mash-up of The Pixies, Belle and Sebastian and The Doors. They present jangle and crunch guitars, and unusually articulate vocals. Songwriting is usually started by one of three band members and refined by the band. “ARGUMENT CLINIC,” featuring twelve mighty songs written over a period of two years. Singer/lyricist/bartender, Keith McNamara, is a natural storyteller with a distinctive voice and and an unhealthy obsession with cult horror films and low budget B-movies. Two of his songs reflect experiences as a bartender: “Doorman’s Lament”, and “Automatic Life”. Guitarist/songwriter Gene Michal, a professional biomedical engineer, who formerly played classical guitar for his cat, now plays leads and arpeggio fills. In addition, he contributed some acoustic guitar to two songs on the album. Carolyn Crampton, artist and formerly the guitarist for the all-girl punk bands The Profalactics (Colorado) and The Varve (Colorado/San Francisco), plays rhythm guitar in the spirit of Johnny Ramone. She also played slide guitar on “Doorman’s Lament” and organ on “The Thing”. Ram Fenster, a film buff, settles all our arguments, and plays bass, rhythm guitar, and sings backup. The band snapped up drummer, Kevin Anderson, when he moved to the Bay Area from Fresno. As a kid, Kevin’s found his drum teacher and mentor, badass jazz drummer Art Tyler (Righteous Brothers), and he has been playing and recording ever since.