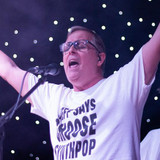 Jeff McCall is an English singer/songwriter/producer creating a retro electronic pop sound that could have been written alongside the synthesizer bands of the 1980’s. This new music has shades of more modern influences, but will still remind you of that epic period of musical creativity. He released his first solo EP "Perspectives" in February 2016 and his debut album "Night Life" in October 2017. Jeff served as a London firefighter for 30 years. He now lives near Cambridge with his wife, Janet, and their dog Buzz.