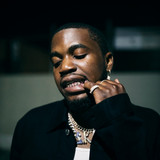 Having made music from before he could even drive a car, KIRK KNIGHT has harnessed the ability to build, record, and perform in a way that makes his art extremely dynamic and unique for every piece of music he creates—be it for himself or others. This type of utility in his music makes Kirk a walking musical Swiss army knife capable of making multi-platinum hits. Born with a voice that is quintessentially New York, Kirk has made himself both a voice and an instrument. This allowed him to further refine his music to the unique sound you can hear on AFTER DARK. While Kirk’s most notable success came by way of A$AP Ferg’s menace-inducing hit “Plain Jane”, now he’s more motivated than ever to take center stage.