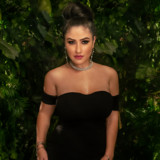 Celia Elieth Cruz (Granada, Nicaragua, May 8th, 1987), known professionally as Celina Cruz, is a Nicaraguan-Canadian recording artist in the Cumbia, Cumbia-Fusion genre. Born in Granada, Nicaragua, Celina was a natural performer from a very young age. Whether it was singing for her family, or for large crowds at local events and church gatherings, music was always part of Celina’s upbringing. In search of a better life, Celina and her family packed their bags and moved to Vancouver, Canada at the age of 6. Growing up, the desire to pursue music was always there, but life took a different course and put her musical aspirations on hold. It seemed that life eventually brought her back to her passion. In her short musical career, Celina has had to opportunity to work with many talented writers and producers. She has drawn from her musical influences (Selena Quintanilla, Jennifer Peña amongst others) to create a unique sound. That cumbia infused sound (along with a very marketable image and persona) is what drew the attention of Sony Music Latin CEO, Afo Verde. A chance encounter over social media got the ball rolling on what is now the beginning of a successful career as a singer/ songwriter. There’s no doubt that Celina is destined for greatness in the Latin music industry. She hopes to be an inspiration to many by sharing her story: Despite what life may throw at you, anything is possible if you want it bad enough.