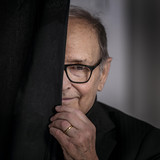 A European who came to dominate the scoring of westerns, Ennio Morricone is a unique figure in the history of film music. Morricone was born in Rome, the son of a jazz trumpet player, in 1928. He was a precocious musician, starting to compose at the age of six, and studied harmony and composition at the Santa Cecilia Conservatory. Post-war Italy didn't offer many opportunities for a serious composer, and Morricone worked in various jazz bands, as well as serving as a staff composer, arranger, and conductor on Italian radio and television. During the late 1950's, he landed a job as orchestrator and assistant to Nascio Nascimbene, then the leading composer in the Italian movie industry. Morricone began writing film scores in the early 1960's, but he first distinguished himself in the western field. When U.S. studios' production of westerns slowed in the early 1960s, Italian (and Spanish) filmmakers stepped in to fill the gap, for the genre had lost none of its luster internationally. Morricone proved adept at writing memorable melodies with his first western, the Spanish-made Gringo, in 1963. His heavy style at that point emphasized the lower registers of the orchestra--cellos, basses, and brass--and often featured an orchestral "growl," a low dissonance that had been a favorite device of Dimitri Tiomkin. The song "A Gringo Like Me" closely followed the dramatic-pop western themes ("Gunfight At the O.K. Corral," "Rawhide") that Tiomkin had been writing for years with Frankie Laine in mind, with an added veneer of pseudo-operatic passion. InMorricone's second western score, Guns Don't Argue, he first hit on a distinctive style: the music emphasized melody more than beat, and had moments of flowing lyricism; it also introduced whistling and featured fairly prominent use of a guitar. That same year, Morricone was commissioned to write the music for A Fistful of Dollars, an Italian-made western by director Sergio Leone, based on Akira Kurosawa's samurai movie Yojimbo and starring Clint Eastwood. This film, with its emphasis on violence, revenge, and duplicity and its minimal reliance on dialogue, was a new kind of western; it was hugely popular in both Europe and the U.S. Morricone's score featured whistling, flutes, electric guitars, jew's harp, and wordless choruses (and occasional choral grunts), along with the usual complement of strings, brass, and percussion, all hooked around haunting melodies. Two sequels followed, For A Few Dollars More (1965) and The Good, The Bad, and the Ugly (1966), each directed by Leone, starring Eastwood, and featuring Morricone's music. The latter was particularly bold, featuring choirs in sweeping, wordless flourishes, closer to Wagner than Delius but with Puccini-like lyricism, depicting the action and emotional content of the script. Westerns comprised only a tiny part of Morricone's output, but they created a lasting demand for his work. He scored as many as eight or nine movies in a year, from offbeat westerns such as Two Mules For Sister Sara to modern crime dramas like Investigation of a Citizen Above Suspicion, from controversial experiments like Pasolini's Salo to mainstream efforts like Brian DePalma's The Untouchables. Since the mid-1960's, Morricone's work has appeared in as many as 250 movies. He's received Academy Award nominations for his music in Terence Mallick's Days of Heaven (1978) and Roland Joffe's The Mission (1986). In the 1980's, his music received long-delayed recognition from outside the film music community when New York-based avant-garde saxophonist John Zorn used it as the basis for performances and recordings by jazz chamber ensemble, doing for Morricone what Miles Davis had previously done for Richard Rodgers, Cole Porter, and Victor Young, among others.