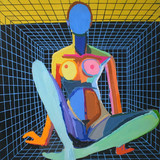 Tales spinning out of order around disconcerting musical interludes seem to resonate with listeners. A few years ago, a licensing company found and commissioned Ezra Bell to play and record Sam Cooke’s worst song for an insurance commercial. Said company flew Ben Wuamett (singer/songwriter) to Mexico City to record the vocals so as not to be sued by the Sam Cooke Foundation. The commercial aired on Superbowl Sunday. Ezra Bell espouses neither football nor insurance but sold out accordingly for the pittance that was paid, and the exposure. Such is the music industry. Many heartfelt messages from unknown listeners keep Ezra Bell busy writing and recording. At some point, a booking agency caught on to the growing cult following and propped Ezra Bell up in front of audiences outside of Portland, forcing the band to drive thousands of miles, sometimes in a single day, to play for small crowds. Ezra Bell recorded a new album over a year ago, and a record label recently decided to sign it, release it, even make vinyl copies. You’re reading this now because you’re about to encounter that album, suitably titled, This Way to Oblivion. Ezra Bell is: Aaron Mattison (horns) Maurice Spencer (bass) Honora Hildreth (vocals) Jeremy Asay (keys, guitar) Tom Trotter (drums) and Benjamin Wuamett (vocals).