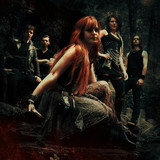 🌲Folk Metal from the Netherlands🌲🌙 Solarcycles worked hard on its unique sound in which tight drums and harsh melodic guitar riffs form the basis of heavy compositions in which floating classical and Celtic violin and melodic keys echo traditional Celtic and Scandinavian folk music. Solarcycles’ compositions are completed and made extra special by vocals influenced by British Indie pop combined with Celtic melodies. During Celtic New Year in 2017 Solarcycles released their first EP Ethereal Storms. Since then the band finally shared their music with the world. Praised for its stage performance and stage decoration for being “spot on” reviewers say Solarcycles “Would certainly not be out of place at one of the big Fantasy festivals”. And in fact that is what Solarcycles’ have been dreaming of all this time: to be asked to perform at amazing festivals. Hopefully this dream will become reality! Lately, Solarcycles is working on five music videos

for all the songs of Ethereal Storms. The first two have already been released on March 21, 2019 and the third one on August 28, 2020. In the meantime, more music is being created! Their first full lenght album is being created as we speak!