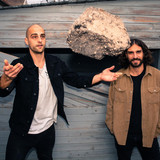 KIDS OF ADELAIDE (Benjamin Jonathan Nolle & Severin Aurel Specht) are a Indie-Folk-Duo based in Stuttgart-Germany. Founded 2010, they started as buskers in the streets of their hometown. Thereby they got to play their first club shows and festivals. Soon they signed their first record deal with the Indie-Label Green Elephant Records, followed by numerous support shows with legends like Led Zeppelin frontman Robert Plant, Jamie Cullum and Donavon Frankenreiter. Their debut album HOME was released in 2012 on Green Elephant Records and got featured by Berlin's radio station FluxFM. After the release they started their first headliner tour. After the releases of their albums BYRTH (2014) and BLACK HAT & FEATHER (2016), concerts in France, Great Britain, Czech Republic and Switzerland, they released the album INTO THE LESS on Snowy Mountain Records and Cargo Records, which is the most expertimental one of their albums.