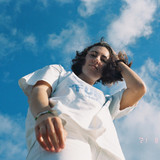 St. South is the moniker for Australian alt-indie-pop bedroom artist Olivia Gavranich. As a songwriter, singer, and producer, St. South has worked tirelessly on the skills required to make the kind of nuanced and soulful music she’s known for. But her sound is not just a study in technical self-reliance; it is an intimate portrait of an artist who lives life on her own terms. Her debut full-length album Get Well Soon unfolds a story of grief, heartbreak and ultimately, self-love. On the surface, Get Well Soon reads as a break-up album, which as an event provides the backdrop, but isn’t the whole picture. At its core, it’s a self-care album, or as St. South says, “a soundtrack to self empowerment." This sentiment is poignantly reflected throughout, which lyrically details the rough times but sonically, reassures the listener that it’s all going to be okay. Holding feelings of joy and sorrow, required a certain kind of self-acceptance — the kind that says it’s ok to feel both, and ultimately, that is the message of Get Well Soon. For Fans Of: Vancouver Sleep Clinic, RY X, BANKS, SOHN, Jack Garratt, Låpsley and Vallis Alps.