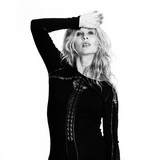 Swedish singer/songwriter Pernilla Andersson celebrates 20 years as a recording artist in 2019. She does this with a status as a Swedish language artist with an ever-growing audience. With highlights including three Grammy nominations and being awarded the Sir George Martin Music Award, personally handed over by the legendary Beatles producer. But Pernilla Andersson is also recognized domestically for her involvements aside her own music. She’s one of the country's leading female producers, she’s deeply involved in environmental issues and as a mentor for young women at the Stockholm Royal College of Music. Pernilla Andersson made her album debut in 1999 with English-language lyrics on "My Journey". The first Swedish language album “Ö” was released in 2008. Both “Ö” and the 2009 album "Ashbury Apples" was Grammy nominated. In 2011 Pernilla went to final stage in the Swedish Eurovision Song Contest trials with the song "Desperados". Before that the track "Johnny Cash och Nina P" had become a radio success and further added to a new level of her popularity. In the 2016 ESC trials she participated with the song "Mitt Guld". The same year she released the album "Tiggrinnan" which was Grammy nominated in the category "Singer/Songwriter of the year".