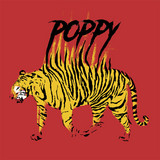 Poppy is an alternative rock trio first formed in the early 1990s with members of 80s Philly punk scene favorites The Electric Love Muffin (Brian Campbell) and Scram! (Craig Heim) and led by Kate Campbell on vocals and guitar. Poppy released a number of albums, EPs and singles in the 90s and early 2000s and after a lengthy hiatus are back and sounding better and louder than ever. Their newest EP “Snakes of New Jersey” was released on Philly independent label Sister Raygun Records in 2019. Poppy has received enthusiastic reviews by Philadelphia Inquirer, WXPN’s The Key, Sonic Boom Magazine and The Big Takeover. Over the past couple of years, Poppy has regularly played at local Philly area venues including Kung Fu Necktie, Johnny Brenda’s, Century Bar, The El Bar, The Mothership, The Underground by Round Guys Brewing, Art for the Cash Poor festival, The Tusk, Connie’s Rick Rack, and the Rusty Nail.