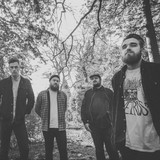 Track and Field was a band with a punk rock past seemingly at odds with their melodic present. The indie emo four piece from Leeds, UK, featured current and ex-members of The Plight and grindcore outfit The Afternoon Gentlemen – strange bedfellows for a band whose sound has been described by Glasswerk as having “hazy melodic vibes... not since Taking Back Sunday’s debut record have we heard emo that’s been this well executed.” Between them, frontman and guitarist Mick Grogan, guitarist Jonathan Kirk, Daniel Comlay and John Defenzi have played in over 100 cities across 15 countries, on more than 20 tours. As part of The Plight, Track and Field members have played Reading and Leeds and Download Festival, while The Afternoon Gentlemen have sold over 8,000 physical records worldwide. These are no rookies, and their experience showed in their work with Track and Field.